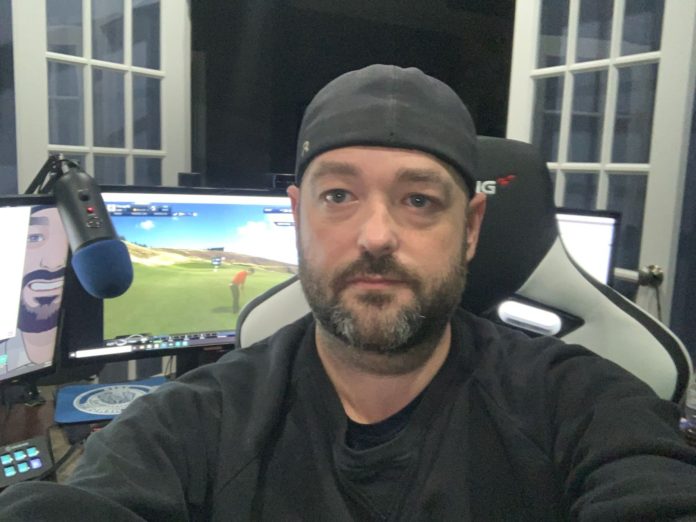 Jason Young – known in the virtual world as Young46 is one of the best players of virtual golf. Jason plays WGT (World Golf Tour) where we often see him on the top of the leaderboard in the tournaments where he participates. He also has a YouTube channel where he streams his rounds and share useful tips with the other virtual golf fanatics.

Jason, thank you for this interview. Tell us more about you, who is Young46?

Just a normal guy with a full-time job who enjoys streaming this great game. Married for nearly 20 years to an amazing woman who supports all the time and effort I put into this game. We have two 17 year old twin boys and outside of work and WGT I spend most of my spring/summer coaching them on a travel baseball team.

Do you play real golf?

I used to be a very avid golfer. At my peak I held a plus handicap, these days I’m probably a 10 or 12 handicap as I only play 2-3 times a year. I have several videos on my YouTube channel of me playing golf rounds IRL.

Do you watch golf on TV?

I’m a big Tiger Woods fan, so I will always try to catch the events he’s playing in. The Master’s is my favorite event to watch, not sure you can be a golf fan and not love Augusta National.

Do you play other golf games? Why did you choose WGT?

I saw WGT on Facebook and me and a friend started playing against each other and I instantly enjoyed it. Prior to WGT I had played all of the TW series of games and was quite good at them. I’ve also tried other online golf games such as The Golf Club, but none compare to WGT in my opinion.

Do you play other games?

I have a group of WGT buddies who I also play Fortnite with each night. We aren’t the best, but we have a blast just hanging out and ragging on each other.

Do you consider yourself as a pro gamer, or this is something you do only for fun?

Good question, with esports starting to blow up I would say by definition I would be considered a pro gamer. It takes a lot of time and effort to be one of the best players at any game. I view WGT more as a part-time job at this point, but it’s a job that I truly love. I really enjoy interacting with with my viewers/fans on Twitch and YouTube.

Do you have favorite golf course on WGT?

Oakmont is my favorite course from a pure enjoyment perspective, scoring wise I tend to do quite well on Congressional.

How much time a day you spend playing WGT?

How much time did you need to get to that level of skills?

The culture of WGT has shifted a lot since I started. Back then, people were more guarded about discussing tips and what not. That’s what led me to start my YouTube channel and begin streaming, people wanted to learn about the game but there simply weren’t a lot of resources out there. Today, the learning curve isn’t as steep because of the availability of knowledge, players can really begin excelling at this game in as little as 6-12 months.

Does equipment matter or you can post decent results with basic equipment on WGT?

Equipment certainly matters, but depending on the course you don’t necessarily need the best equipment to score well. I’m participating in the eTour event on Monday, players all use the same equipment which is a bit lower than what I currently play but I’ve still been able to win several events playing against users with top level equipment.

Do you get some extra attention from WGT as one of the best players out there? Do they ask for your opinion for game updates, etc. or you see them just like the other players?

There are certainly perks to being a top player/influencer in the game. I’ve had the pleasure of meeting a lot of people who work behind the scenes at WGT and give my input about suggested changes. Having met and interacted with many of them I can tell you the WGT team is a tight knit group that truly takes pride in the game

If you can change one thing on WGT what will you chose?

The 3W is probably the biggest issue most of us top players have. It tends to be a bit erratic at times which can be frustrating when you’re playing key rounds/events. I would also love to see WGT develop a relationship with the PGA Tour and run similar events as those on the European eTour.

What do you think about the eTour launched by the European Tour ?

I think it’s a fantastic idea. The esports industry is booming, I had lobbied for several years for WGT to start doing live events so I was thrilled when WGT paired up with the USGA to begin the Virtual US Amateur two years ago. The eTour is a great opportunity for WGT players to showcase their talents and the game to a broader fan base of golfers.

What advice you would give to all WGT players which want to get to your level?

Practice! It takes a lot of dedication and time to get good at this game.

How Data and Analytics Are Changing the Golf Industry 📈
06:08
PGA Tour

How much money each golfer won at the 2022 Valspar Championship

How much money each golfer won at the 2022 Commercial Bank...