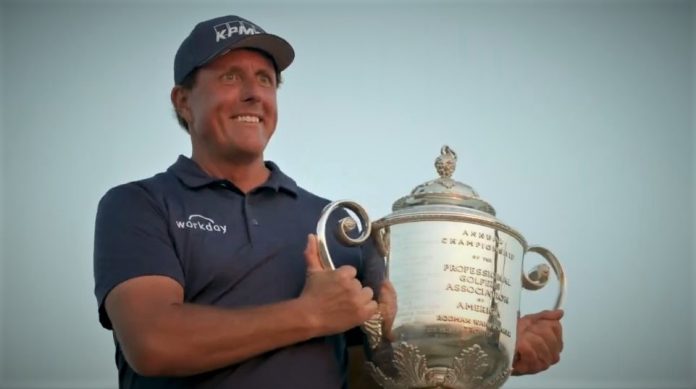 Phil Mickelson (50 years and 11 months old) became the oldest player to win a major after his triumph at the 103rd PGA Championship at Kiawah Island. Mickelson posted final round 73 to finish the tournament at six under par. This was enough to win by two over Brooks Koepka and Louis Oosthuizen who shared second place at four under par.

Mickelson’s triumph on The Ocean Course is really impressive. The veteran was struggling with his game recently and his last top finish was last August. His last win on the PGA Tour was in February 2019 at the AT&T Pebble Beach Pro-Am. Thanks to his win at the PGA Championship the American returns inside the top 50 in the world. He is now ranked 32nd, while prior the PGA Championship he was ranked 115th.

Louis Oosthuizen posted another great result in a major. The South African, who won The Open in 2010, now has five runner-up finishes in the Big-four. He finishes second twice at the PGA Championship and once in each of the other three majors.

Another veteran – Padraig Harrington also turned back the clock and posted his 16th top 10 finish at a major. Harrington, who won the PGA Championship back in 2008, finished at two under par and shared fourth place on the final leaderboard.