Sergio Garcia finished in style and won the 2018 Andalucia Valderrama Masters. Due to several interruptions in the last few days the tournament was reduced to 54 holes and set for a Monday finish. Garcia started the day three shots clear and increased his lead to four shots to finish at 12 under par. Shane Lowry from Ireland finished second at 8 under par while Mikko Korhonen from Finland finished solo third at 6 under par. 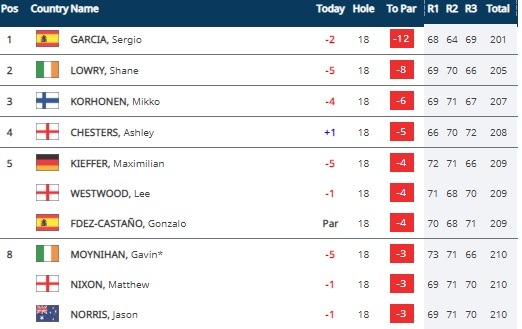 The best moments from today:

Tour cards and titles on the line.

Recap the rain-delayed #ValderramaMasters finish in under two minutes. pic.twitter.com/O4bDKLUogP

This was Garcia’s third win in this event.

The win sent Sergio Garcia to 27th in the world ranking.

Birdie on 14 gives him a two-shot lead with four to play. pic.twitter.com/q9b1d8gVls

Come for the shot. Stay for the reaction. Bob MacIntyre makes an ACE!
00:45

No ducks were harmed while making this video
00:38

Viktor Hovland | Every shot from his win at Hero World Challenge
47:07

Antoine Rozner claimed the title in Qatar with crazy birdie on...